In July of 2014, a study prepared by the minority staff of the Special Investigations Division of the House Government Reform Committee found that 30% of nursing homes in the United States – 5,283 to be exact – were cited for almost 9,000 instances of nursing home abuse and neglect over a two year period. The most common instances of nursing home abuse and neglect included: untreated bed sores, sub standard medical care, malnutrition, dehydration, preventable accidents, inadequate sanitation and hygiene, among other complaints.

According to the report, many of the cases reported were serious enough “to cause actual harm to residents or to place the residents in immediate jeopardy of death or serious injury.”

Nursing home abuse and neglect will only stop in this country when people stand up and hold nursing homes accountable. A majority of the nursing homes owned in the United States are operated by private corporations. While many for-profit corporations are doing a wonderful job putting residents and their needs first – many of these privately owned nursing homes are putting profits before people. In other words, these substandard facilities are not hiring enough nurses to properly care for residents. Instead, these facilities rely on minimum wage employees (while using understaffing techniques) to maximize profits at the expense of one of our most vulnerable groups.

If you have a friend, family member or loved one in a nursing home, and suspect that “something just isn’t right,” you can contact a reputable Illinois nursing home abuse and neglect attorney at (847) 628-8305 or at vince@argentolaw.com, to perform an investigation into the nursing home’s practices and procedures. There is never a cost for performing the investigation. Nursing home abuse and neglect will only stop when people stand up for their loved ones and make it stop. 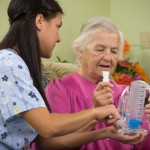